Manufacturing Multilayer PCBs (Up to 36 Layers)

The demand for multilayer boards has been on the rise. The drive for electronics to be smaller, faster, and more powerful has made the multilayer PCB much more popular. The ability to create multilayer boards opens up a world of possibilities allowing the engineer to create more densely populated circuit boards which allows miniaturization. This is a huge benefit that double sided boards are not able to offer. 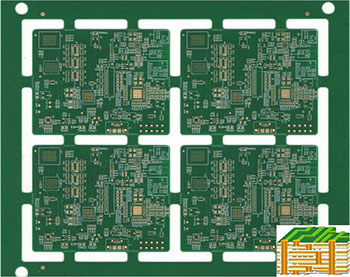 Multilayer PCBs are only a little different that the Double Sided PCBs.

Multi Layer PCB StackupAs you can see in the image to the right, a four-layer board starts with a rigid core of FR4 and copper. The internal core is processed for traces on those prior to the other fiberglass and copper being added, and the entire board is laminated together.

There is the B stage PrePreg, which is fiberglass that is still soft that will need to be heated in order to become rigid. It acts like a glue to keep the inner core adhered to the outer copper foil.

The copper foil added consists of very thin and loose sheets of copper. They are sandwiched together with the Prepreg and inner core, and placed in a PCB Lamination Press. Pressure and heat are applied to the material, which causes the Prepreg to “flow” and bind the layers together. Once it cools, the fiberglass is then hard and the entire board is very rigid.

After lamination of the board, the outer layers are processed for traces and drilling. We will discuss those steps in greater detail in later articles.

That gives the basics of the starting material for a Double Sided PCB and Multi Layer PCB. Is it what you expected or thought it would be?

Double-sided pcb have one layer dielectric layer in the middle, both sides are traces layer. Multilayer PCB is a multilayer traces layer, a dielectric layer between each 2 layer, a dielectric layer may be made very thin layers . Multilayer circuit board having at least three conductive layers, wherein the outer surface 2layers, while the remaining one was synthesized in the insulating plate. Electrical connection between them is usually done by plated through holes in the circuit board on the implementation of the cross section

2-28 layer is available in our factory,

Multilayer pcb use in professional electronic equipment (computers, military equipment), especially in the case of the weight and volume overload. In high-speed circuits, the multi-substrate is also very useful, they can provide more than two layer boards for the printed circuit board designers to laying cable, and provides a large area of ground and power.